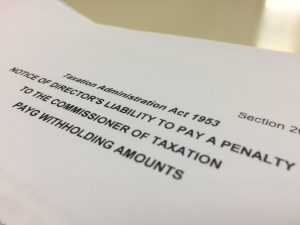 On 1 March 2019 the Treasury Laws Amendment (2018 Measures No. 4) Bill 2018 received Royal Assent.  The effect of this, amongst other changes, resulted in the removal of the three-month grace period relating to  Superannuation Guarantee Charge (SGC) debts.

As a result, from 1 April 2019 SGC liabilities become personal liabilities of the director by operation of law if they remain unreported and unpaid on the due date for an SGC Statement.  For most companies Superannuation (SG) contributions are payable on the 28th day of the month after the end of the quarter.  An SGC Statement is due on the 28th day of the following month.

If the SGC liability is reported before the due date, a non-lock down notice may still be issued.

Notably this new amendment applies to amounts arising on or after 1 July 2018.

Notwithstanding that there is no deduction to the company for SGC amounts paid to the ATO when the company failed to pay its SG contributions on time, these new laws coupled with single touch payroll reporting means that directors must remain vigilant and ensure they are compliant with their taxation reporting obligations.

Watch this space for the proposed amendments to the director penalty regime contained in the Treasury Laws Amendment (Combating Illegal Phoenixing) Bill 2019 which seeks to further extend this power to include GST, WET and LCT.

To understand more about the use of Director Penalty Notices see our previous blog – https://dyeco.com.au/director-penalty-notice-dpn/

In brief, however, a DPN is just one of the tools the ATO has in its armory for recovering taxation liabilities.  Non-compliance with a DPN results in a director being personally liable for a company’s Superannuation and/or PAYG debts.

A lock down notice is issued to directors that have not lodged their SGC, IAS or BAS’s within the three-month period and the debt remains unpaid resulting in personal liability by operation of law and the only remedy is payment.  Again note, the 3-month rule no longer applies to SGC.  The impact of non-compliance can be devastating to directors, including non-executive directors who are now burdened with company debt due to their non-compliance.